After a Kenny Rogers Roasters chicken restaurant opens up across the street from Jerry and Kramer’s building, Kramer is unable to sleep or function due to the light shining into his apartment from the giant red neon sign atop the restaurant. Can Kramer get a court to grant an injunction to shut down the sign? Can he sue for a monetary judgment?

Kramer could first try to bring a trespass case against the restaurant, claiming that the light from the restaurant is trespassing on his property. Under normal circumstances, a plaintiff can show trespass by demonstrating how the defendant has made a physical intrusion on to the property without permission. But because light is intangible, Kramer would also have to prove physical damage to the property. Kramer could claim that the damage to his property is proven through the fact that he is no longer able sleep or function in his apartment; he can no longer use the apartment properly.

This argument might be very persuasive. Since Kramer’s apartment is a residential property and he would be suing a commercial establishment, it is highly likely that Kramer would be able to get a court to order that the “giant red sun in the shape of a chicken” be turned off.

While this court order would help Kramer in the future, can he also sue the restaurant for past damages?

Kramer could sue the restaurant under a tort theory of nuisance. The general rule for a “light nuisance” claim is that when the intensity of the light is so powerful that it will disturb an ordinary person, the court will find damages. While Kramer may not be an “ordinary” person, if the light is disturbing him, it would probably be disturbing a regular man. 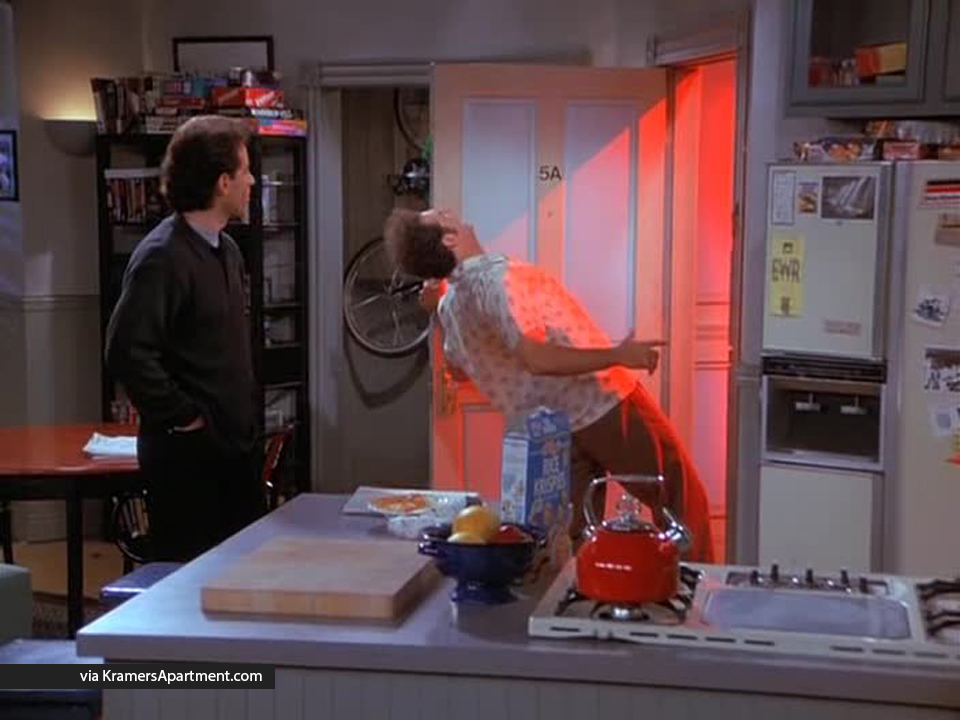 In New York, in order to proceed on a nuisance claim, Kramer will have to show 5 elements.

A few of these elements off the bat seem simple to show. The light was certainly caused by another’s conduct (the restaurant) and Kramer makes it clear that the light is interfering with his right to use his apartment. He can’t eat or sleep, even his “rods and cones” are screwed up!

But what about the first 3 elements?

Well even though the court calls for intent, that doesn’t mean that the restaurant has to intentionally want to harm Kramer. All that Kramer would have to show is that they intended to put up the sign and that they should have known that the giant red chicken sign would shine so brightly into the neighboring apartments. Judging by the size of the sign and its close proximity to the nearby apartment buildings, a court sould find that this element is also in Kramer’s favor.

What constitutes “substantial interference” is going to be a fact based question and change given the exact nature of each case. New York courts generally follow a balancing test between the harm caused to the plaintiff and the social value of the defendant’s conduct. Given how little value there is for such a giant advertisement and how adversely the neon sign is affecting Kramer, though not nearly as adversely as broccoli affects Newman, it could be that a court would deem this element to be in Kramer’s favor as well.

The reasonableness of the defendant’s action also has no clear cut rule, and will be judged on a case-by-case basis. However, the standard for the court to judge reasonableness is an objective standard of the reasonable person, and not specifically Kramer’s perspective. Which may be good, because nobody ever really knows what you’re going to get with Kramer.

Ultimately, it seems like Kramer would likely win if he were to bring a nuisance claim. New York courts have awarded both damages and injunctions for “light nuisance” in situations similar to Kramer’s, as well as for comparable situations for “noise nuisance.”

All-in-all, Kramer’s plan to drive Kenny Rogers out of business with his giant “bad chicken” sign is not his only or even his wisest course of action. A nuisance suit would be better for everyone involved. Kenny Rogers Roasters would have to take down the giant chicken, and may have to pay damages too, but would still be able to stay in business. By taking it to the courts instead of the streets, Kramer can get some sleep and everyone can enjoy their hickory-smoked-wood-tasting-chicken-family-feast in peace.