When Kramer attempts to purchase three calzones from Paisano’s pizza he tries to pay in change, which is rejected by the cashier. Is a store owner permitted to reject a payment made in legal tender?

It was not until 1965 that pennies and nickels were even classified as a permissible form of legal payment for all transactions. The Coinage Act 1873 had declared that the five cent, three cent (yes, there was a three cent coin!), and one cent coins were only legal tender “for any amount not exceeding twenty-five cents in any one payment.”

But the Coinage Act of 1965, which superseded the law from 1873, declared that all types of change and bills are “legal tender for all debts, public charges, taxes, and dues.” This means that any of the coins or dollar bills that we use on a day-to-day basis are legal to be used as a form of payment.

This, though, does not mean that a store owner has to accept all coins and bills as payment. The Treasury Department notes that there is no Federal law which requires an individual to accept currency. The department writes on their website: “Private businesses are free to develop their own policies on whether or not to accept cash unless there is a State law which says otherwise.”

This means that if Paisano’s Pizza had clearly posted a sign saying “we don’t accept change,” “we don’t accept $100 bills,” or something similar, then the cashier would be able to reject that type of payment. Based on this, a number of stores have begun to refuse all cash payments for a variety of reasons.

But does Paisano’s Pizza state the store will not accept change? We know that the pizza store does reject certain types of payment, as can clearly be seen at the checkout counter. A sign is mounted saying “NO CHECKS” and another sign says “NO CREDIT.”

No sign, however, says anything about the types of coins or dollars they will or will not accept. 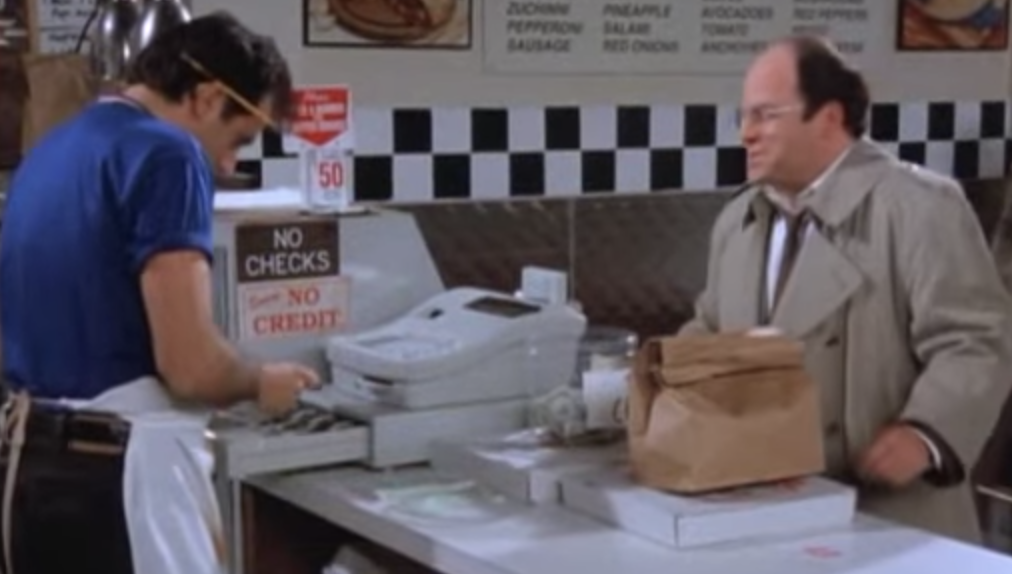 Does this mean that Kramer can pay with a sock full of pennies? Our inquiry does not end here. Remember, the law says that all types of change are “legal tender for all debts,” which means that he must only accept the bills if Kramer was actually in debt to the store.

The key question here is at one point does a transaction become a debt. On the most basic level, a customer acquires the item when it comes into his possession. So if Kramer has taken the calzones, then he is now in debt to the store and Paisano’s must accept change as payment.

We know that Kramer ordered the calzones, and, along with Kramer’s shirt and jacket, they are hot and ready to go. But while Kramer takes possession of his shirt and jacket, he never actually touches the box of calzones and never takes them into his possession. While it is possible that Paisano’s is under obligation to deliver the calzones since he and Kramer had some kind of an oral agreement, this is likely a stretch of the law. As can be imagined, these types of personal store interactions have not been litigated (at least from what we could find).

It is during this interaction that the store owner says” “nooo, you’ve got to have bills, paper money, you can’t pay with this.” This declaration, before Kramer has become indebted to the store, allows Paisano’s to reject change as a form of payment.

Interestingly, while Paisano’s can reject Kramer’s attempt to pay in change, a different transaction in “The Calzone” can be paid for in any legal tender.

Earlier in the episode, Jerry asked Elaine’s boyfriend-of-the-week to buy him a box of Cuban cigars. While they turn out to have been “producto de Peru,” Jerry still agrees to pay his debt to Gack for the cost of the chicken-bone cigars.

Since Jerry has incurred a debt, Gack must accept any legal tender as payment.

Zack is an attorney licensed in the state of New York. He blogs for fund and educational purposes only at seinfeldlaw.com View all posts by Zachary Schrieber