During a charity softball game in Central Park, George injures star-of-stage-and-screen Bette Midler after he slides into her during a collision at home plate. George was ruled safe at the plate. But is he safe from the law?

Bette Midler could bring a civil suit against George either for the intentional tort (injury) of battery or for the unintentional torts of either reckless misconduct or negligence. Meaning, she could try to prove that George intentionally inflicted injury upon her, or she could attempt to show that although George didn’t intend to injure her, he acted with such disregard for safety that he is still liable for the injuries.

However, what separates this case from a traditional injury case is that George and Bette Midler were engaged in a softball game. Physicality and the risk of injury are essential parts of sports. Even softball, a non-contact sport, has elements of roughness. Courts, therefore, have often focused on the distinct nature of sports when deciding whether a defendant is liable for an injury caused while playing the game. While some players have clearly crossed the line, such as when Juan Marichel of the New York Giants intentionally struck another player with a baseball bat, it’s not clear that George has. Let’s discuss.

If Bette Midler were to successfully win under a theory of intentional injury, she would have to prove

Proving the second element is pretty simple in this case, as Ms. Midler was rushed to the hospital directly following her collision with George. But did George intend to hurt her?

In the sports context, it can be difficult to prove intent to harm. The desire to win the game causes players to play hard, and it is difficult to show where the line is between simply playing the game competitively and wanting to inflict injury. In baseball, home-plate collisions are quite common, although Major League Baseball has recently tried to eliminate them from the game. Here, Jerry encourages George to run hard, yelling “come on George” and to “keep going!” With that kind of encouragement in a close game, it seems natural that George would do everything he could to try and win, even if that meant causing a collision at home plate.

However, there are some critical pieces of evidence Midler could utilize to demonstrate that George was trying to intentionally injure her. As George stepped up to the plate, Midler taunts her and George does not look pleased.

Midler could use this to show that George was trying to get back at her for taunting him. Additionally, while it is quite a voyage for a man of George’s generous proportions to make it from third to home, the following photo could be construed as a man looking to knock away someone’s hot dog rather than someone just trying to win a game. 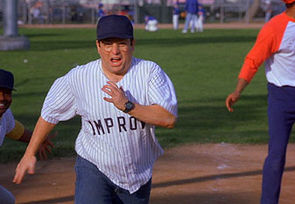 Most damaging to George could be testimony from Midler’s understudy and Jerry’s girlfriend Gennice. Twice, Gennice makes remarks that imply that George intended to cause harm to Midler.

If Gennice is called to testify, and can make it through without breaking down in tears, her testimony could really do damage to George’s case. She could claim that George both did this for her and that he had a plan. This, coupled with the photo evidence and George’s motivation from the taunting could be enough to prove that George really did intend to cause Midler’s injury. If so, no amount of prayer, even from the Reverend Sun Myoung Moon, would be able to help George.

George, though, could bring an affirmative defense that when a player steps onto the field they are consenting to any injuries that may be caused during normal gameplay. This “rules of the game test” would allow George to argue that although he did cause the injury to Midler, since it was within the rules of the game for him to make such a hard slide at the plate he cannot be found liable for the harm.

Midler could also claim that George acted with reckless misconduct or negligence. Neither of these tort theories require an intent by George to cause harm, and reckless misconduct only requires that the reasonable man would know or realize his actions create “an unreasonable risk of physical harm to another.” The question for the court would be whether the reasonable person would have known that George’s actions would create an unreasonable risk of harm. This theory of reckless misconduct is considered to be the standard in the professional sports arena, while negligence is applied in amateur sports like a charity softball game.

In all likelihood though, George is going to be ok. Courts don’t want to discourage the playing of sports by having players worry about the threat of litigation from an opponent. But had the tables been turned, we can all be sure that George would be suing up the yin-yang to make sure that he got his day in court. 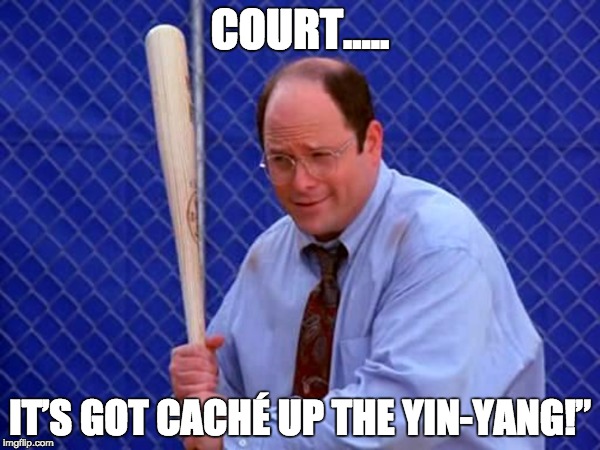 4 thoughts on ““The Understudy” – Sports Injuries”