After Jerry makes a joke about dentists to Father Curtis, Jerry is accused of being an anti-dentite. Is it illegal to be an anti-dentite? Could Jerry’s joke be considered criminal?

While hating a group of people or saying hate speech is not illegal, even about dentists, there are two doctrines outlined by the Supreme Court that could allow Jerry to be in criminal trouble for making an anti-dentite joke. The first is the “fighting words” doctrine. These are words that are so inflammatory, and without any social value, that the court views them as being outside the constitutional freedoms of speech protected under the First Amendment that dentists came to this country in search of. There is a 4 part test for determining whether words are “fighting words.”

Let’s analyze. Kramer certainly thinks that Jerry’s joke was very provocative, and both Tim Whatley and Mr. Abbott – Dr. Abbott D.D.S. actually – were both so touchy about the joke. Dr. Abbott even said he would knock out Jerry’s teeth, which might be enough to fulfill the second prong of the test too! However, Jerry did not make the joke face to face, and he directed it at a group of people, dentists, not a single individual. Additionally, there is a strong public policy argument against criminalizing jokes, and courts have set a high bar for what kind of speech or joke would be considered inflammatory enough to offend someone, even as a comedian. Therefore, it would be very difficult for a court to find that Jerry’s joke violated the “fighting words” test.

This second test, the Brandenburg Test or “imminent lawless test,” was outlined by the Supreme Court in 1969 and determines what kind of language is so hateful that it would incite a crowd to do violence. The court reasons that this speech is not protected by the First Amendment because it is “directed to inciting or producing imminent lawless action and yada, yada, yada.” For speech to be illegal under this test there must be 3 elements present.

If Jerry’s joke about those people were to fulfill each of these factors, then Jerry would be in big trouble. Fortunately for Jerry, though, it would be very difficult for a court to find that he had violated even one of these elements. Jerry had no intention to produce lawless action, he was just making a joke to Father Curtis. Additionally, there was no imminence of violence since Jerry said the joke in a confessional, not in front of a large crowd that could be riled up from the joke. Even if Jerry had made the joke in a public setting, it’s pretty unlikely it would provoke people to attack a “denty.” Even if they wanted to attack a dentist, they probably wouldn’t be able to get an appointment to see one anyways. Just like with the “fighting words” doctrine, Jerry’s joke would not violate the Brandenburg test. 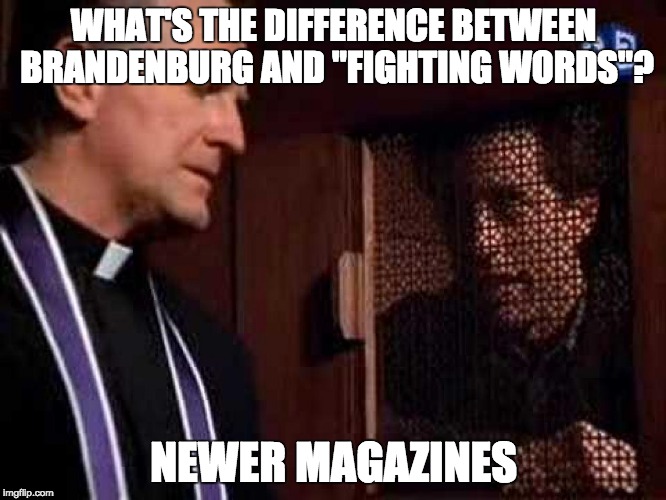 There is a high threshold that must be crossed before a court will deem a person’s statements as being outside the bounds of the free speech rights of the first amendment, and the Supreme Court will not make illegal the peaceful expression of unpopular views. Comedians can rest easy knowing that they won’t be thrown in jails for a few jokes and slurs. But then again, who needs them anyway?